Home > About Bhutan > Arts and Crafts 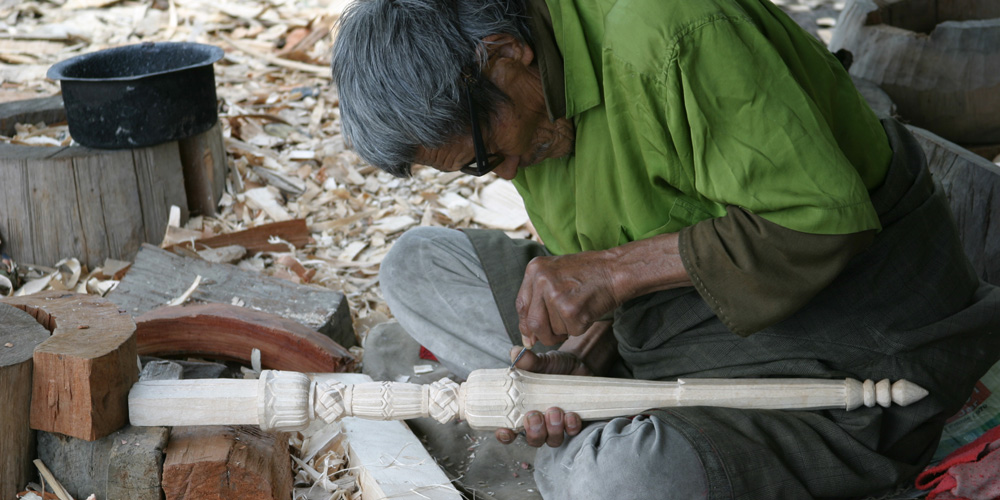 An essential part of Bhutan’s cultural heritage are the thirteen traditional arts and crafts that have been practiced from time immemorial. These arts were formally categorized during the reign of Gyalse Tenzin Rabgay, the fourth temporal ruler of Bhutan.

The thirteen arts and crafts are categorized as follows:

The textile industry is an integral part of Bhutanese life and culture. As such the art of weaving is widely practiced.

Women of eastern Bhutan are skilled at weaving and some of the most highly prized textiles are woven by them. In the past, textiles were paid as a form tax to the government in place of cash and people from western Bhutan travelled all the way to Samdrup Jongkhar to acquire/barter for woven textiles. Bhutanese textiles are woven from cotton, raw cotton and silk with intricate motifs woven into the cloth.

Most of the forests in Bhutan are richly stocked with bamboos and canes of various species.

Taking advantage of these abundant natural resources, the Bhutanese people have mastered the skill of weaving cane and bamboo products. Widely known as Tshar Zo, this art is spread throughout the country and products such as baskets, winnowers, mats, containers known as Palangs and bangchungs are all made. The people of Kangpara in eastern Bhutan and the Bjokaps of Central Bhutan are the pioneer’s and masters of this craft. Their products are now sold to tourists earning them additional income and keeping this craft alive.

The art of wood turning is known as Shag-Zo and is traditionally practiced by the people of Trashiyangtse in eastern Bhutan.

The master craftsmen of this vibrant art are known as Shag Zopa. They are famed for the wooden cups and bowls traditionally known as dapas and phobs. These wooden bowls are made of special wooden knots known as Zaa and are highly valued. Until the advent of steel and brass, these bowls were widely used by the Bhutanese. Today they are typically sold at craft markets and offered as gifts.

Bhutanese paintings are quintessential of the arts and crafts tradition known as Lha-zo.

An ancient art that has been practiced since antiquity, paintings captures the imagery of the Bhutanese landscape. Master painters are known as Lha Rips and their work is apparent in every architectural piece from the massive Dzongs to glorious temples and spiritual monasteries and even in modest Bhutanese homes.

Shing-zo or carpentry plays a major part in the construction of Bhutan’s majestic fortresses or dzongs, temples, houses, palaces and bridges.

Do-zo is the ancient craft of masonry, a trade which is still practiced today.

In Bhutan, temples, Dzongs, Chortens (or stupas) and farm-houses are all constructed using stone. Classic examples of stone work are those of Chorten Kora in Tashiyangtse in eastern Bhutan and Chendebji chorten in central Bhutan.

Par zo is the art of carving and another traditional Bhutanese art form that has been perfected over generations.

Major carvings are carried out on stone, wood and slate. The traditional designs crafted on these materials create beautiful and distinctive art works unique to the Land of the Thunder Dragon.

Jim zo or clay work is an ancient craft that has been practiced and passed down over the centuries.

This art form preceded other sculpture works such as bronze and other metal works. Statues of deities, gods and goddesses and other prominent religious figures exemplify clay work in Bhutan.

Between the Stone Age and the Iron Age we have the Bronze Age around about 3500 BC.

Bronze was commonly used to cast containers such as cups, urns, and vases. People also shaped bronze into weapons and armor such as battle-axes, helmets, knives, swords and shields. Bronze casting in Bhutan was introduced only in the 17th century and was mainly spread through the visiting Newari artisans that came from Nepal. The Newars were first invited by Zhabdrung Nawang Namgyal to cast bronze statues and religious items such as bells and water offering bowls. It was through these artisans that the art was introduced and today, quite a few Bhutanese practice bronze casting.

The art of iron work is known as Gar-zo and blacksmithing in Bhutan began sometime in the late 14th century.

It is believed that it was introduced by a Tibetan saint known as Dupthob Thangtong Gyalpo. He is revered by the Bhutanese people as a master engineer for his skill in casting iron chains and erecting them as bridges over gorges. He is supposed to have built eight suspension bridges in Bhutan.

The vibrant craft of traditional ornament making is still designed today and is known as Troe ko.

Its products are widely used by Bhutanese women. A master craftsman skilled in shaping beautiful ornaments is regarded as Tro Ko Lopen. Using precious stones and metals such as corals, turquoise, silver and gold, these master craftsmen create all manner of ornaments and implements including necklaces, bangles, earrings, rings , brooches, amulets to contain ritual objects, traditional containers to carry the much chewed beetle nut, ritual objects and much more.

Paper-making is another art that has deep roots in Bhutan. People engaged in producing the traditional Bhutanese paper or De zo are known as Dezop.

This traditional paper is made from the bark of the Daphne tree and was widely used in the past. Most religious scriptures and texts were written on Dezho using traditional Bhutanese ink or occasionally in gold. While the presence of readily available modern paper has overtaken the market, people still produce and use Desho as carry bags, wrapping for gifts and envelopes. The art still continues in Trashiyangtse where the raw material is readily available.

Tshem zo or the art of tailoring is a popular art amongst the Bhutanese.