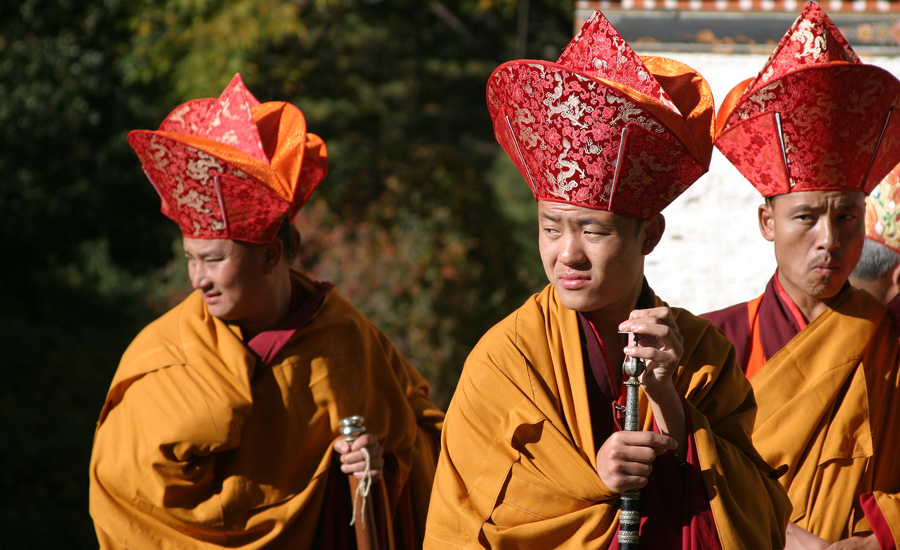 Bhutan is a Buddhist country and people often refer to it as the last stronghold of Vajrayana Buddhism. Buddhism was first introduced by the Indian Tantric master Guru Padmasambhava in the 8th century. Until then the people practiced Bonism a religion that worshipped all forms of nature, remnants of which are still evident.

Until then the people practiced Bonism a religion that worshipped all forms of nature, remnants of which are still evident even today in some remote villages in the country.

With the visit of Guru Padmasambhava, Buddhism began to take firm roots within the country and this especially led to the propagation of the Nyingmapa (the ancient or the older) school of Buddhism.

The Buddhism practiced in the country today is a vibrant religion that permeates nearly every facet of the Bhutanese life style.  It is present in the Dzongs, monasteries, stupas, prayer flags, and prayer wheels punctuate the Bhutanese landscape. The chime of ritual bells, sound of gongs, people circumambulating temples and stupas, fluttering prayer flags, red robed monks conducting rituals stand as testaments to the importance of  Buddhism in Bhutanese life.

Though Bhutan is often referred to as the last Vajrayana Buddhist country, you can still come across animistic traditions and beliefs being practiced by the people.

The form of Buddhism practiced in Bhutan has absorbed many of the features of Bonism such as nature worship and animal sacrifice.  Also worship of a host of deities, invoking and propitiating them. According to Bonism these deities were the rightful owners of different elements of nature. Each different facet of nature was associated with its own specific type of spirit.