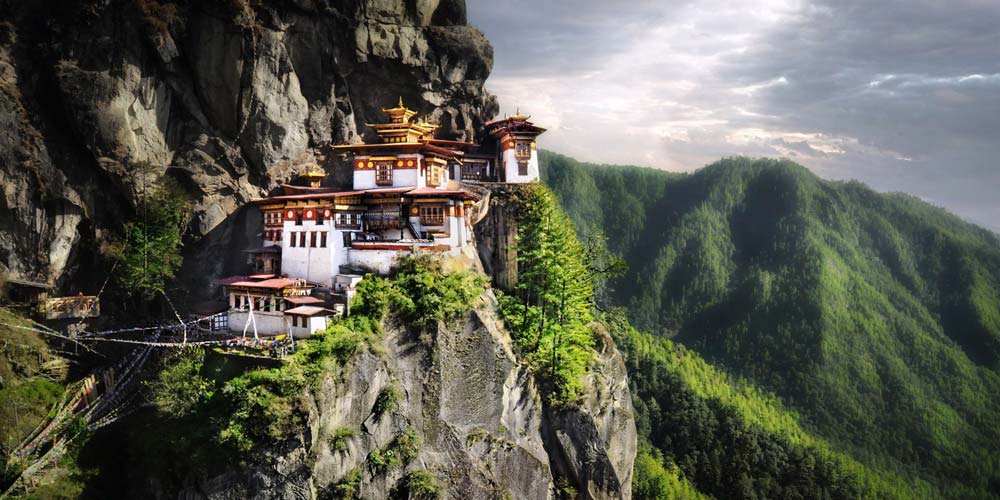 Paro is rich in culture, scenic beauty, abounds in myths and legends and home to many oldest temples and monasteries. Paro valley has managed to keep it’s bucolic nature in spite of the nation’s only airport and many development projects. It is also a home to Mount Jhumolhari (7314metres) situated at the northern end of the valley whose glacier forms the Pachu flowing through the valley. The valley is also famous for the produce of Bhutan’s Red Rice.

This is also known as the “fortress of the heap of jewels.” It was built during the time of Zhabdrung Ngawang Namgyal in 1646 after the small Hungrel fortress built by lam Drung Drung was offered to Zhabdrung Ngawang Namgyal. Today, it houses the monastery and administrative office for the people of Paro. The approach to the Dzong is through a traditional covered cantilever bridge. A walk through the bridge to the Dzong, over a stone inlaid path, offers a good view of the architectural wonder of the Dzong as well as life around it. It is also the venue for the Paro festival held in Spring.

Ta Dzong overlooking the Rinpung Dzong was built in 1951 as the watch tower. It is round in shape, more like the European castle. From 1967 it was re-established as the National Museum and holds a fascinating collection of Thangkha painting, relics, handicrafts, art, masks, costumes, armour and Bhutan’s exquisite postage stamps. The museum’s circular shape augments its varied collection displayed over several floors. The visit will provide an insight in the rich and unique cultural heritage and tradition of Bhutan.

Drukgyel Dzong This Dzong, with a delightful village nestling at its foot, was built in 1646 by Zhabdrung Ngawang Namgyel to commemorate his victory over the Tibetan invasions. “Druk” means the land of the thunder dragon or the land of dragon people; “gyel” means victory. The Dzong caught fire in 1951 and now it only remains as ruin. This Dzong is built at a strategic point where the route from Tibet enters the Paro valley. Later when the invasions ceased, this route was used for trade between Tibet and Bhutan. On a clear day, one can see the beautiful view of the majestic Jhumolhari from the village, below the Dzong.

7th century to subdue the ogress that lay across the whole of the Himalayas. There is another temples said to be built on the same day called Jampey Lhakhang in Bumthang. It is believed that kichu was built over her left foot and Jampey Lhakhang over her left knee. Later in 1968, Her Majesty, the Royal Grandmother Ashi Kesang Choden Wangchuk, built a second temple alongside the first one, in the same style. Inside the courtyard, there is an orange tree that bears fruits, which is quite amazing because no where in the valley you can find orange trees bearing fruits with the exception of one temple.

Kila Goenpa is a serene home for Buddhist nuns who have dedicated their life to spiritual fulfillment and lead undisturbed lives of religious studies, prayer and meditation. The Goenpa is nestled on the mountain side below the Chele La. From Chele La the Goenpa is about one hour walk through magnificent woods.

Druk Choeding Lhakhang Built in 1525, this town temple was built by Ngawang Chhogyel, one of the prince-abbots of Ralung in Tibet and an ancestor of Zhabdrung Ngawang Namgyel. This is located on your left before you enter Paro town.

Dungtse Lhakhang was built in 1433 by the iron bridge builder Thangtong Gyalpo. It has three floors representing hell, earth and heaven with some remarkable paintings.

Taktshang Monastery, popularly known as the Tiger’s Nest, is Bhutan’s most revered temple. It is perched on the side of a 900m cliff above the Paro valley. According to legend Guru Padmasambhava is said to have flown here on the back of a tigress from Singye Dzong in Lhuentse, to meditate in a cave where Taktshang now stands. Hence the name ‘Tiger Nest’. It was from there he propagated Vajrayana Buddhism that was prophesized by the Buddha at the time of attaining Nirvana. This site has been recognized as a sacred place and was visited by Zhabdrung Ngawang Namgyel in 1646. It is believed that a Bhutanese should visit the monastery at least once in their lifetime. In April 1998, a fire destroyed the main structure of the building and its religious contents but now this Bhutanese jewel has been restored to its original splendor. The hike to the monastery makes a splendid half-day excursion.