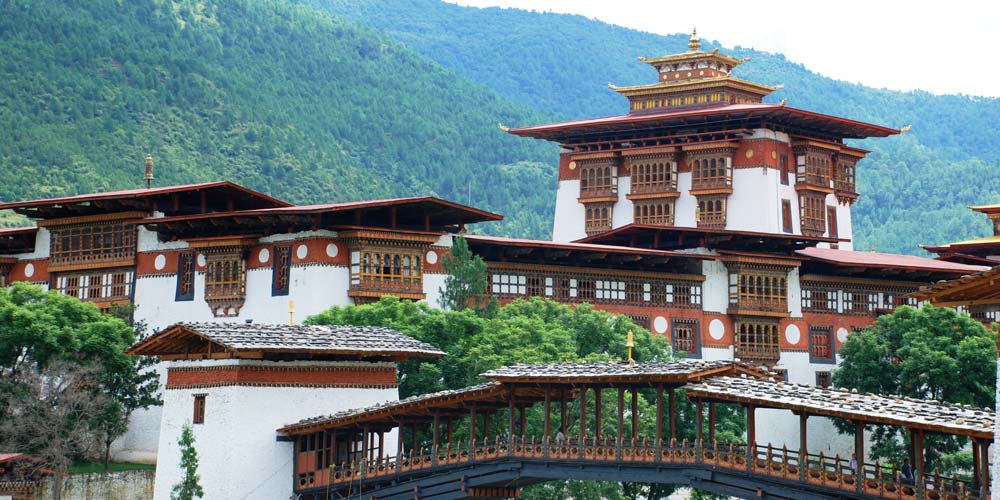 Punakha served as the capital of Bhutan until 1955. It continues to be the winter residence of the central monastic body. It has an area of 1,107.77 sq.km with altitude ranging form 1,300m to 5,050m. The Dzongkhag has 11 Gewogs which includes Barp, Chub, Dzomesa, Goenshari, Guma, Kabjisa Lingmukha, Shenga, Bjime, Talo and Toewang. Expect for Talo and Guma Gewogs, most Gewogs are located along the banks of Pho Chhu (male river) and Mo Chhu (female river).

Blessed with a temperate climate and fed by the Pho Chhu and Mo Chhu rivers, Punakha is another fertile valley in the country with abundant crops from terraced rice fields, seasonal fruits and vegetables.

Punakha Dzong, also known as the ‘Palace of Happiness’, is a massive structure at the junction of the two rivers. Built in 1637 by Zhabdrung Ngawang Namgyal, it is 600 feet long and 240 feet wide, with a sprawling six-storeyed rectangular tower. Punakha Dzong is the most beautiful and well-known fortress connected with Bhutan’s historical traditions. The valley and Dzong of Punakha was the seat of power and politics in medieval Bhutan. It was in Punakha, where the first hereditary monarch, Gongsar Ugyen Wangchuck, was enthroned. Punakha Dzong houses sacred artifacts and the embalmed body of Zhabdrung Ngawang Namgyal.

Khamsum Yulley Namgyel Choeten is an invigorating one hour hike form the road head. It was built to remove negative forces and promote peace, stability and harmony in the changing world. One can enjoy breathtaking views of the valley from the Chorten which dominates the upper Punakha valley.

Chimi Lakhang is a small 15thCentury temple famous for its fertility endowments/rites due to the blessing of lam Drukpa Kuenley. The temple sits on a hillock shaped as only Drukpa Kuenley could describe it “like a women breast.” The word ‘Chimi’ translates as “No dog” and is traced to the story of how Durkpa Kuenley subdued the demoness of Dochula. Apparently, Lam Drukpa Duenley had followed the demoness of Dochula down to the valley of Punakha and Wangdue. It is believed that the demoness had disguised herself in the form of a dog. He subdued and making a prophecy that a temple would be built on the spot in future.

The temple houses the lams iron bow and arrow, a small altar chorten made by the lam himself and some of his personal effects and scriptures. A wooden effigy of Drukpa Kuenley’s male organ is used to bless pilgrims, particularly childless couples or those who have suffered miscarriages or early deaths often named Kuenley or Chimi in honor of the saints and the place.