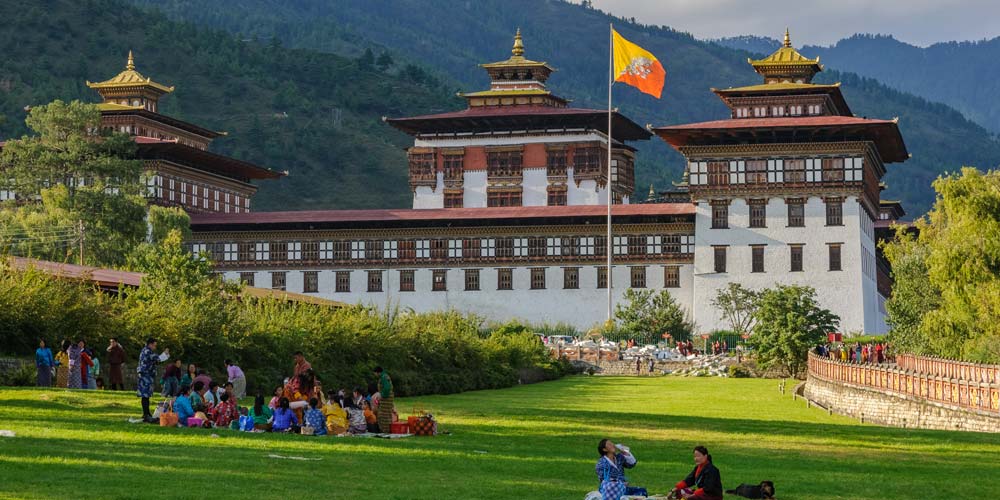 Thimphu is the capital city of Bhutan. It is the seat of government, religion and commerce. The pleasant mix of modern development with ancient traditions makes it a unique town. Thimphu a home to the Royal family, civil servants, the monk body and expatriates maintains a strong national character in its architectural style.

Tashichhodzong the “17th century Fortress of the Glorious Religion” houses the throne room of His Majesty the King, the main secretariat building and the central monk body. The huge spectacular courtyard is open to the visitors during Thimphu Festival/Tshechu and when the central monk body moves to it’s winter residence in Punakha. The new building across the river is National Assembly Hall.

The Folk Heritage Museum founded by Her Majesty the Queen Ashi Dorji Wangmo Wangchuk. It provides a fascination insight into the traditional Bhutanese farm house and rural past through exhibits and documentation of rural life.

The Institute of Traditional Medicine Equal emphasis is given on both allopathic and traditional method of healing. The treatment house, the school and the rich medicines abundant in the Kingdom are prepared in this complex.

Takin Preserve houses the world endangered animal Takin, the national animal of Bhutan. It is listed as a vulnerable species for its uniqueness by international conservation agencies. Takin is a rare animal found only in northern part of Bhutan and its association with country’s religious history and mythology.

The National Memorial Chorten is a sacred shrine built in 1974 in memory of the ‘Father of Modern Bhutan’, third Druk Gyalpo Jigme Dorji Wangchuk under the initiative of Royal Grand Mother Ashi Phuntsho Choden Wangchuk. It is dedicated to the world peace and prosperity. The numerous religious paintings and complex tantric statues housed inside the monument reflect both the peaceful and wrathful aspects of Buddhist deities.

Changangkha Lhakhang is 12th century old fortress-like temple. Hundreds of people make pilgrimage to offer prayers and butter lamps every day. From the temple you can get a fascinating view of the Thimphu Valley.

Simtokha Dzong which stands on a lofty ridge is the first fortress among the chain of fortress built around the country by Zhabdrung Ngawang Namgyel in 17th century.